The first episode was shown at San Diego Comic Con on July 20, 2019 as a sneak peek and released online later that day. While Infinity Train was originally designed as a ten-episode miniseries, the show's success prompted a second season, known as The Cracked Reflection. From then on, each season followed a different protagonist and was known as a "book".

On May 10, 2020, Owen Dennis, the creator of the show, announced that the show would be moved to HBO Max for a third book. Infinity Train, from this season on, was known as a Max Original. While the show continued to be produced by Cartoon Network Studios, the channel lost rights to air its reruns.

The series takes place on an an extensive and strange train in which characters are stuck. They must navigate their own life problems to lower their "number" and escape back home. The show has three books with their own titles. Season 1 is entitled The Perennial Child. Book 2 is entitled The Cracked Reflection, Book 3 is entitled Cult of the Conductor and Book 4 is entitled Duet.

The third book was then released on August 13, 2020, Once again featuring ten episodes.

A fourth and final season, called Duet, premiered on HBO Max on April 15, 2021. Dennis explained on Twitter this season was not intended to be the final one when it was written (Dennis and the writing staff claim to have enough stories to last a total of eight Books), and expressed a desire to continue the show if given the opportunity. Currently, there are a total 40 episodes of Infinity Train.

It is the last Cartoon Network original series to be premiered under Christina Miller's tenure, as she was stepped down on being the network's president on November 27, 2019.

The first book follows Tulip and her companion One-One, which is composed by Glad-One and Sad-One in their journey through a seemingly infinity train with limitless possibilities to find a way to Tulip's home.

The following books feature a different pair of protagonists, most of them connected in one or another way to the previous passengers. 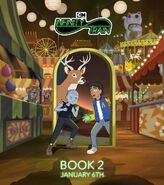 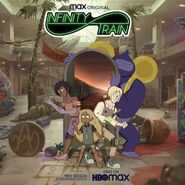 Book 3 - Cult of the Conductor poster.

Tulip singing Word Up from Cameo.