The Cartoon Network Wiki
Register
Don't have an account?
Sign In
Advertisement
in: Shows, Hanna-Barbera Series, 1970s shows,
and 2 more

The series stars Hong Kong Phooey, the “number one super guy” who travels about the city in his “Phooeymobile” fighting crime with the aid of his manual, The Hong Kong Book Of Kung Fu. The stories begin at the police headquarters, where Hong Kong Phooey's alter ego, Penry, works as a mild-mannered janitor under the glare of Sergeant Flint ("Sarge"). Also at the police station is Rosemary, the telephone operator, who has a crush on Hong Kong Phooey. After Rosemary gets a call and explains the crime, Penry runs into a filing cabinet and (always getting stuck) transforms himself into Hong Kong Phooey.

A running gag is that Hong Kong Phooey is such a respected hero that when his incompetence causes him to crash into, harm, or otherwise inconvenience a civilian, the passer-by feels honored as opposed to annoyed or embarrassed, such as when he drove the Phooeymobile through wet cement, splattering the workers, who responded that it was an honor to have a whole day's work ruined by "the great Hong Kong Phooey."

Hong Kong Phooey was voiced by Jazz legend Scatman Crothers. Sergeant Flint was voiced by Joe E. Ross, best known as Officer Gunther Toody in the early '60s television series Car 54, Where Are You?. As Flint, Ross revived Toody's famous "Ooh! Ooh!" exclamation. Sergeant Flint was very similar both in voice and appearance to Botch, assistant zoo-keeper at the Wonderland Zoo on Help! It's the Hair Bear Bunch that Ross also voiced.

Like many animated series created by Hanna-Barbera in the 1970s, the show used the limited Hanna-Barbera self-created laugh track. 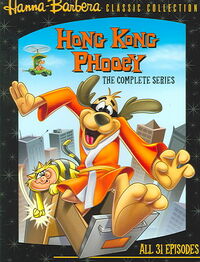 On July 12, 2009, it was announced that David A. Goodman had been hired to pen a Hong Kong Phooey film. Alex Zamm is set to direct and Broderick Johnson, Andrew Kosove, Brett Ratner, and Jay Stern are producing. Alcon Entertainment will back the film. It was announced August 10, 2011, that Eddie Murphy will be voicing Penry/Hong Kong Phooey in the film. On December 28th, 2012, Test footage of the film and a Marvin the Martian project was leaked (released). The film is likely to be released around 2014.