The Cartoon Network Wiki
Register
Don't have an account?
Sign In
Advertisement
in: Shows with wikis, Shows, 2000s shows,
and 14 more

This show has a wiki of its own: Hi Hi Puffy AmiYumi Wiki.

According to Register, the target audience of the show is boys and girls from six to eleven years old. However, the show also has a following of fans of the real-life Ami Onuki and Yumi Yoshimura who make up the Japanese pop duo PUFFY, known as "Puffy AmiYumi" in North America. Register, a fan of the band, wished to spread its fame to other parts of the world and thus produced the cartoon.

The series features the adventures of animated versions of the duo, who have been immensely popular in Japan since making their debut in 1996. The group now has several U.S. albums to its credit, including a 2004 companion album to this program, and was known to viewers of Cartoon Network in the USA for performing the theme to the Teen Titans animated series.

The series was met with very positive reviews from critics and audiences, and became one of Cartoon Network's most successful original shows at the time. Unfortunately, it only ran for three seasons, and 39 episodes produced, with only the first 34 episodes aired in the United States. The cancellation was likely due to management shakeup, leading Sam Register to leave the channel.

Hi Hi Puffy AmiYumi depicts characters with the same name and profession as the actual PUFFY members but with different appearances and exaggerated personalities:

Yumi Yoshimura, the younger of the duo, is depicted as a cynical, sarcastic punk rocker with blue-mauve hair and blue eyes. She dresses in a heavy metal/grunge/goth style with studded necklaces and bracelets, a light purple T-shirt with a skull that has the same facial expressions as she does and seems to have a mind of its own, a black miniskirt, purple bike shorts, and black army boots. Being younger, Yumi is also more impetuous than Ami and rushes headlong into a decision before thinking. However, Yumi has a mature side, too, and sometimes reasons with Ami's childish obsessions. Her main signature colour is purple. Yumi is voiced by Grey DeLisle.

Ami Onuki, the older one of the duo is depicted as a peppy, optimistic, and cute girl with vivid pink coloured hair and eyes. She favors bubblegum pop and wears a 1960's go-go dress, also sporting a flower in her hair and white knee-high go-go boots. As the optimist, Ami always looks on the bright side of things and finds a solution to every situation (being two years older and more mature). Her main signature color is pink. But her favourite colour is rainbow (As Harmony said in the series premiere). Ami is voiced by Janice Kawaye.

Kaz Harada is the duo's well-intentioned yet money-grubbing manager, whose successes are usually balanced out by his foolish decisions. Veteran character actor Keone Young provides his voice. He is also a huge fan of sumo wrestling, as seen in the episode "Sumo Kaz".

Jang Keng and Tekirai are Yumi's and Ami's pet cats, respectively. Jang Keng (sometimes called "Jengo") is a black cat and Tekirai ("Teki" for short) is a fluffy white cat. The girls adore their cats, but Kaz is a constant victim of their mischief. Janice Kawaye voices Tekirai while Grey DeLisle voices Jang Keng.

Harmony is the self-proclaimed "Number One Fan" of the girls and of Kaz by the end of the episode "Dis-Harmony" and in "Fan Clubs". She is a six year old psycho girl who is so obsessed with the duo that she follows them around the world and finding it almost impossible to think of other things, annoying Ami and Yumi to no end. At the end of her first appearance, she becomes obsessed with Kaz's singing and this becomes a running gag in some episodes, appearing from nowhere and telling Kaz she is his #1 fan (Number 1 villager in It's Alive). The character is voiced by Sandy Fox.

Timmy (voiced by Grey DeLisle) is the brown-haired boy who was a brat from Brat Attack.

Edwin Blair is a sinister land developer, and the antagonist in the two episodes in which he appears. He usually tries to tear down beloved places for his own selfish needs. Blair is voiced by Tom Kenny.

King Chad is "a bad boy super hunk", as once described by Ami and Yumi. He is obsessed with the card game Stu-Pi-Doh! (a parody of Yu-Gi-Oh! and actually spells Stupid) and thinks highly of himself. In "Janice Jealous", he had a girlfriend named Janice who shared his interests in video games, yo-yo tricks, and comics. True to his name, King Chad wears a fur-lined cape and gold crown, and sits on a beautifully adorned throne. In the episode "Janice Jealous", the character King Chad goes out with is based on Janice Kawaye, Ami's voice actress. She also voiced the character Janice. Chad is voiced by Katie Leigh.

Wally is a hulking yet slow-witted man hired by Kaz as the girls' bodyguard. He is overprotective, pummeling anyone with whom Ami and Yumi attempt to make contact. Kaz later hired him as a bouncer for a party he was throwing and, more recently, Ami had him try being a roadie. He is voiced by Will Ryan.

Domo is Kaz's dog. He looks much like his owner, even sharing a similar style of glasses (Kaz is the only one who doesn't see the resemblance). Like Kaz, he is constantly in conflict with the cats, especially since he enjoys eating their food. Domo is also voiced by Keone Young.

The Talent Suckers are a vampire rock trio from Transylvania who first appeared in the eponymous episode, "sucking" Ami and Yumi's talent from them. They returned in two other episodes. The straight man of the trio is Vlad (Charlie Schlatter), a tall vampire who speaks with a Transylvanian accent. The second band member is a short vampire, Nicolai (Corey Burton), who is easily made nervous. (A running gag has Vlad slapping Nicolai back to his senses.) The third Talent Sucker is Mitch (also voiced by S. Scott Bullock), a vampire who does not talk, but instead grunts and groans.

Atchan is a character Ami and Yumi met at Camp Youwannasushi. He thinks he is a superhero. He is based on Vo Atsushi, the lead singer of the pop band New Rote'ka. In fact, Vo Atsushi actually appeared in a live-action segment dressed up as Atchan in the series finale. Atchan always refers himself in the third person. Before becoming a superhero, Atchan's face resembles Mac from Foster's Home for Imaginary Friends. After he declares himself a hero, his looks change to look more like Kamen Rider's. He has a painted star over his right eye resembling that of Kiss guitarist Paul Stanley. His costume seems to be based on his manga idol, Mungbean Man as shown in Secret Origins. He is voiced by Rob Paulsen.

Julie is Yumi's friend in the episode "Julie AmiYumi", which was not aired in the United States. She is a former band member whose signature colour is green. She plays a keyboard guitar. She treats Yumi kindly, but is always mean to Ami. In the episode, she tries to take out Ami and Yumi as revenge for their stealing the stardom which she believed to be rightfully hers. She could not remember Ami's name and thus called her Andy, Annie or Arthur. At the end when she is standing in the rain, still swearing revenge. Julie wears her hair is a green messy ponytail. Her signature outfit consists of a white shirt, black jacket, blue jeans, and high black boots. She is voiced by Lara Jill Miller.

Farmer Zeke is Ami and Yumi's friend who owns a farm. Edwin Blair, the land developer, tried to take his failing farm, Happy Acres, and turn it into a parking lot, but Ami, Yumi, and Kaz come to Zeke's aid and play music to help the farm prosper again. Zeke wears brown boots, overalls, a white shirt, and a red baseball cap.

Appearances in other CN media

Ami and Yumi were seen in the Cartoon Network's 20th Birthday Party poster in 2012.

Yumi made a cameo appearance in the OK K.O.! Let's Be Heroes episode, Crossover Nexus.

Ami and Yumi made a background appearance in their poster in a TV pilot for Villainous.

In 2005, Macy's Thanksgiving Parade debuted the Hi Hi Puffy AmiYumi float. It is modeled after the cartoon duo's decked-out, mystical tour bus. A life-sized puppet of well-intentioned but stingy, band manager Kaz, piloted the musical bus and large bobble-head editions of the duo's favorite felines, Jeng Kan and Tekirai, are also on board. Inflatable walk-around characters of Ami and Yumi popped out of the roof of the bus. This float was only seen in 2005 and is unlikely to ever return. The figure of Kaz still survives as of 2018. The real-life duo Puffy AmiYumi-the only people who guest starred in this float-performed "Friends Forever" at the float at 2005.

Two DVDs of series were released on November 2005, Rock Forever and Let's Go. These DVD releases are now out-of-print and are very difficult to find, especially on online stores.

Two video games based on the series were made:

Hi Hi Puffy AmiYumi: The Genie and the Amp for Nintendo DS (2006)

The series was released on HBO Max Latin America on March 2022.

On October 2006, Cartoon Network cancelled the series after three seasons and thirty nine episodes due to Sam Register's departure from the network. The network itself also removed all mention of the series from their official website. Notoriously soon after cancellation, Renegade Animation was hired to do the work on Cartoon Network's first television movie Re-Animated, which Register was very mad about because of the channel's name. The movie was not well-liked by audiences and critics and has never seen daylight in reruns since prior to the then-upcoming ill-fated spinoff Out of Jimmy's Head, resulting both Renegade Animation and Cartoon Network are still responsible for the Re-Animated scheme after cancelling Hi Hi Puffy AmiYumi. 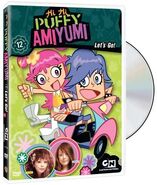 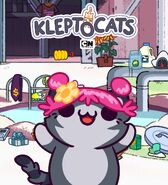 Yumi as stone in Crossover Nexus

Yumi after being restored by Strike's pen in Crossover Nexus 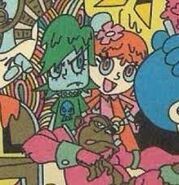