Harvey Birdman, Attorney at Law (sometimes referred to simply as Harvey Birdman) is an American animated television series created by Williams Street and produced by Cartoon Network Studios that aired on Cartoon Network during its Adult Swim late night programming block. The series' pilot first aired in 2000 before the Adult Swim block was officially incepted,[1] and later became a series in 2001.[2]

The show revolves around the activity of the Sebben & Sebben law firm, which is staffed mainly by superheroes and other characters who had originally been featured in 1960s-era Hanna-Barbera cartoons, most notably Birdman and the Galaxy Trio. The series' final episode aired on July 22, 2007.

Harvey usually fills the role of a criminal defense attorney, though he will act as a civil litigator or other such job when the plot calls for it. The series uses a surrealist style of comedy, featuring characters, objects, and jokes that are briefly introduced and rarely (if ever) referenced thereafter. Also, because the series relies heavily on popular culture references to classic television animation, Harvey Birdman, Attorney at Law constantly delves into parody, even featuring clips of these series or specially-created scenes which mimic the distinctive style of the animation being referenced. Harvey Birdman, Attorney at Law is notably the first Williams Street cartoon to maintain continuity through the entire series. Various episodes reference Harvey's (or another superhero's) former crimefighting career. The episode "Turner Classic Birdman" even serves to bridge the gap between Birdman and the Galaxy Trio and Harvey Birdman, Attorney at Law.

Instead of rigid plot structure, much of the humor is derived from the fact that superheroes and supervillains are given more realistic and human qualities, such as a mad scientist named Dr. Myron Reducto, who becomes a paranoid prosecutor. Also, several of the plots revolve around the popular myths about classic Hanna-Barbera characters, such as Shaggy and Scooby-Doo being stoners.

Although the first season was animated using traditional cel animation, the remaining seasons were animated using Adobe Flash. The reason for the switch was that the animation studio was having difficulty maintaining the fast pace of the show, and thus the production of episodes slowed down due to constant retakes. By animating the series at Turner Studios in Atlanta, Georgia with Flash, not only were problems corrected faster, but production costs were much lower.[citation needed] Some animation was also done for the show at Bardel Entertainment in Vancouver, British Columbia.

Harvey Birdman - A superhero who starred in the Hanna-Barbera show Birdman and the Galaxy Trio in the 1960s. Birdman's secret alter ego from that show, Ray Randall, is not mentioned in this series, though it can be found hidden in the opening credits; as well, in the episode "Deadomutt, Part 2", a police mugshot of Harvey identifies him as "Harvey R.R. Birdman."

Birdman gets strength and power from sunlight, and grows weak if kept away from the sun for too long. His superpowers include flight, though as Harvey Birdman, he often completely forgets about this. He also has the ability to create a shield of solid light, and the ability to shoot destructive energy beams from his fists. These powers are thought to stem from the crest on his helmet, though Harvey is not entirely sure of the crest's true role in his powers.

He has since retired from his superhero job and is now working for the law firm of Sebben & Sebben. Harvey is generally honest, a little dim, 6'6", and has large wings growing out of his back, genetically inherited from his father. His clients consist of other Hanna-Barbera characters of the past and present. 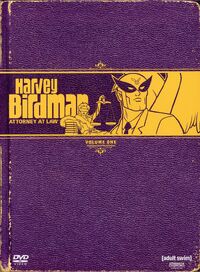 Each DVD is in the shape of a law book. Each season's box art is nearly identical, and the only change for each season is the background color (Volume 1 is purple, Volume 2 is blue, and Volume 3 is black). The small picture next to the title and the title itself also appear different.

Retrieved from "https://cartoonnetwork.fandom.com/wiki/Harvey_Birdman,_Attorney_at_Law?oldid=93700"
Community content is available under CC-BY-SA unless otherwise noted.