The Cartoon Network Wiki
Register
Don't have an account?
Sign In
Advertisement
in: Hanna-Barbera Series, Shows, 1970s shows,
and 3 more

NBC (USA)
TV Tokyo (Japan)
Godzilla is an American animated series co-produced by American animation company Hanna-Barbera Studios and the Japanese film company Toho in 1978 and aired on NBC in the United States and TV Tokyo in Japan. The series is an animated adaptation of the Japanese Godzilla films produced by Toho. The series continued to air until 1981, for a time airing in its own half-hour timeslot until its cancellation.

The series follows the adventures of a team of scientists on the research vessel called the Calico, which is headed by Captain Carl Majors. The rest of the crew include scientist Dr. Quinn Darien, her nephew Pete, her research assistant Brock, and the ship's first mate, Carl. Also along for the ride is Godzooky, the "cowardly cousin" of Godzilla and Pete's best friend, who has a lighthearted role in the show. Godzooky can attempt to fly using the small wings under his arms. Whenever Godzooky tries to breathe fire, he usually just coughs up smoke.

The group often call upon Godzilla by using a special communicator when in peril, such as attacks by other giant monsters. Godzooky is also able to howl to summon Godzilla. Godzilla's size in the animated series shifts radically, sometimes within a single episode or even one scene. For instance, Godzilla's claw can wrap around a large ship, and only minutes later the team of scientists fit rather neatly on Godzilla's palm. In addition, Godzilla's trademark atomic breath is altered so he breathes simple fire. He can also shoot laser beams from his eyes much like Superman's heat vision.

Hanna-Barbera was unable to use Godzilla's trademark roar, so they cast Ted Cassidy to voice the character, similar to his role in the live-action series The Incredible Hulk.

Each episode would include a brief exposition on a scientific instrument or phenomenon, thus providing an educational segment for the show.

Godzilla originally aired in the following formats on NBC:

For the second season beginning in September 1979, the show was separated from its package programs and aired in its own half-hour timeslot as simply Godzilla. A month later, new episodes of Godzilla and The Super Globetrotters were packaged together as The Godzilla/Globetrotters Adventure Hour which ran until September 1980.

On September 27, 1980, after 26 half-hour episodes, the show went into reruns and Godzilla was once again teamed up with other Hanna-Barbera characters: The Godzilla/Dynomutt Hour ran until November 1980, followed by The Godzilla/Hong Kong Phooey Hour which ran until May 16, 1981. On May 23, the show returned to the half-hour format as Godzilla and the last regular showing aired on September 5, 1981 (to be replaced by The Smurfs, which would last three times as long). Throughout the 1980s until the late-1990s, the series rested in limbo (with the exception of a limited videocassette release of two episodes). Since 1993, it has been rebroadcast on TNT, Cartoon Network and Boomerang.

3. "Attack of the Stone Creature"

7. "The Colossus of Atlantis" 8. "The Horror of Forgotten Island" 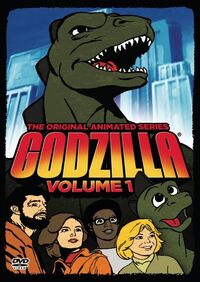 As of November 9, 2011, all episodes of season 1 are also streaming on Netflix and available to view on Hulu.