The Cartoon Network Wiki
Register
Don't have an account?
Sign In
Advertisement
in: Generator Rex, Shows, 2010s shows,
and 13 more

22 minutes (approx.)
Status
Ended
Generator Rex is an American animated television series for Cartoon Network and is created by Man of Action. John Fang of Cartoon Network Studios serves as supervising director. It is based on the comic M. Rex, published by Image Comics in 1999. The series premiered on April 23, 2010 and concluded on January 3, 2013. A crossover special with Ben 10: Ultimate Alien aired on November 25, 2011, while a second special with Ben 10 aired in 2021, eight years after the show had already ended.

Five years prior to the series, a massive explosion (known as "The Nanite Event) released tiny microscopic nano machines into the atmosphere, infecting everyone on the planet. While most nanites are harmless, some turn people into monsters known as EVO's (short for Exponentially Variegated Organism). EVO's often go berserk and cause destruction and chaos. To combat this threat, and organization known as Providence was founded. Providence, looking for a way to stop the EVOs, finds a teenager who gives them hope that they can eventually stop the EVO war.

The series follows an amnesic teenager named Rex Salazar who fights for Providence. Rex is gifted with the power to cure EVOs and to build weapons out of his body. Surprisingly, Rex is also an EVO, but he can control his own powers. Rex while working for Providence also has to deal with being a teenager as well as being used as a secret weapon by Providence, much to his dismay. Rex must unlock the secrets of his past with the help of his friends and teammates to stop the EVO war and the various villains he accouters.

Rex made a cameo in the OK K.O.! Let's Be Heroes episode, Crossover Nexus, where he appeared as one of the Cartoon Network heroes that were summoned and defeated by the episode's main antagonist, Strike.

All three seasons are available to watch on iTunes.

The series was released on a 2 disc DVD set on October 2010.

Generator Rex was added to HBO Max in Latin America on March 2022, but is yet to come to the service in the US.

Generator Rex: Agent of Providence, a video game based on the series, was released on November 1st, 2011 for Wii, Nintendo 3DS, Nintendo DS, Playstation 3, Xbox 360.

Various Generator Rex games were also made playable on Cartoonnetwork.com as flash games. Though, these games have since been taken down due to Adobe Flash's shut down in 2020.

The series aired on the Latin American channel, Tooncast. 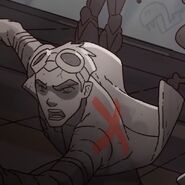 Coming Up Next bumper from Tooncast.

Won in 2010 for the episode "The Day That Everything Changed".