The Cartoon Network Wiki
Register
Don't have an account?
Sign In
Advertisement
in: Shows, Shows older than the network, Hanna-Barbera Series,
and 16 more

Frankenstein Jr. and The Impossibles

Frankenstein Jr. and The Impossibles

September 7, 1968
Frankenstein Jr. and The Impossibles is an animated science fiction television series produced by Hanna-Barbera Productions. It debuted on CBS on September 10, 1966, and ran on Saturday mornings until September 7, 1968.

The program consists of two segments: Frankenstein Jr., depicting the adventures of a heroic robot named Frankenstein Jr., and The Impossibles, centering around the exploits of a superhero team that poses as a rock band.

CBS ran two new segments of The Impossibles each Saturday, separated by a new segment of Frankenstein Jr.

The program contained two segments, which each served as a middle ground between Hanna-Barbera's traditional cartoon early output and its superhero-based late-1960s cartoons.

The show was the target of complaints about violence in children's television, and was canceled in 1968. The Frankenstein Jr. segments were later recycled in the 1976 series The Space Ghost/Frankenstein Jr. Show, which aired on NBC from November 27, 1976 until September 3, 1977, replacing the canceled Big John, Little John.

Frankenstein Jr. takes place in Civic City, where boy scientist Buzz Conroy (voiced by Dick Beals) and his father Professor Conroy (voiced by John Stephenson) fight supervillains with the aid of a powerful heroic robot named "Frankenstein Jr." (voiced by Ted Cassidy). "Frankie", as Buzz usually referred to him, was more than a little reminiscent of the title character in Gigantor. Buzz built "Frankie" and activated him through an energy ring.

The Impossibles are a trio of superheroes (Multi Man, Fluid Man, and Coil Man) who pose undercover as a Beatles-esque rock music band. The characters' names are descriptive of their powers: Multi-Man (voiced by Don Messick) can create identical copies of himself; Coil-Man (voiced by Hal Smith) can form into a super-springy coil; and Fluid-Man (voiced by Paul Frees) can transform his body into any fluid. The heroes receive assignments from "Big D" (also voiced by Frees), who contacts them via a receiver in the base of Coil-Man's left-handed guitar. 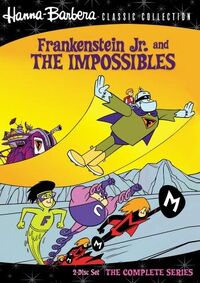 On April 26, 2011, Warner Archive released Frankenstein, Jr. and The Impossibles: The Complete Series on DVD as part of their Hanna–Barbera Classics Collection. This is a Manufacture-on-Demand (MOD) release, available exclusively through Warner's online store and Amazon.com.