30 minutes
Status
Ended
Evil Con Carne is an American animated series created by Maxwell Atoms, the originally aired a series of segments on Grim and Evil, along with The Grim Adventures of Billy and Mandy, from August 24th, 2001 to October 2002. Evil Con Carne later ran as a separate program from July 11th, 2003 to October 22nd, 2004.

The show is about evil Hector Con Carne, who wants, and tries, to take over the world. However, he was blown up in an explosion. So, he was left without a body, reduced to a brain, and stomach. So he's now using a Russian circus bear, named Boskov, as a body.

Hector Con Carne was a "jillionaire playboy" crime lord and evil genius bent on taking over the world. Eventually, he was caught in an explosion initiated by his nemesis, Cod Commando, a soldier for the Secret Paramilitary Organized Response Kommand (S.P.O.R.K.). The explosion scattered most of his body across the world. He was rescued by a scientist, the curvaceous Major Dr. Ghastly, who placed his living remains into two containment units: one for his brain, and the other for his stomach. These two units were later installed into Boskov, a purple Russian circus bear, giving Con Carne's brain control over (almost) all of the bear's actions and movements.

Hector, Dr. Ghastly and his military leader, General Skarr, then created a secret laboratory on an island with a bunny-shaped mountain known as "Bunny Island" (a parody of Blofeld's lair in the James Bond movies). Gathering an army, Con Carne resumed his quest for world domination and made a new goal: to find his missing body parts.

The "Con Carne" of the title is Spanish/Italian for "with meat", as well as a pun on the expression "evil incarnate" and the dish "Chili con carne".

Evil Con Carne's original show, Grim & Evil, became the result of a viewer's poll in 2000. The poll, titled Big Pick was held on the internet from June 16 to August 25, 2000. The three choices for short films to become animated series were Grim & Evil (shown as Meet the Reaper), Whatever Happened to... Robot Jones?, and Longhair and Doubledome. After the event, the Meet the Reaper short film won with 57% of the vote and soon became Grim & Evil. While Whatever Happened to... Robot Jones? became an animated series in 2002, Longhair and Doubledome appeared at another Big Pick event, but lost once again.

After Evil Con Carne was cancelled its characters appeared in The Grim Adventures of Billy & Mandy. The first cameo was in the episode "Chicken Ball Z" which ended with Mandy purchasing Hector's Bunny Island. General Skarr moved to Billy's neighborhood in the episode "Skarred for Life" after Bunny Island was bought out by an "entertainment corporation that didn't want competition in world domination". Since then General Skarr has been a recurring character in the Grim Adventures. In the episode "Company Halt", Con Carne and Ghastly appear in Endsville, in order to recruit Skarr and revive Evil Con Carne (the organization, not the show) in another attempt to take over the world; naturally, like most of their other schemes and misadventures, it ends in failure. According to Tom Warburton, characters from Evil Con Carne (as well as Sheep in the Big City were originally set to appear in the television special The Grim Adventures of the KND. Hector, General Skarr, and Dr. Ghastly did briefly appear in the end credits in a crossover with Camp Lazlo titled "Evil Camp Carne".

Hector Con Carne and Boskov appeared in the MAD episode, Once Upon a Toon, where their roles were to be one of the Cartoon Network protagonists who lost their identity.

Boskov appearaed in Cartoon Network's 20th anniversary poster, as well as one of the bumpers.

Major Dr. Ghastly made a cameo in the OK K.O.! Let's Be Heroes episode, Crossover Nexus, where she appeared as one of the Cartoon Network heroes that were summoned and defeated by Strike.

Evil Con Carne re-ran as part of the revival of Cartoon Planet in 2012.

Six episodes of Evil Con Carne were included as bonus episodes in The Complete Season 1 DVD set of The Grim Adventures of Billy and Mandy.

The series was released on demand in 2017.

The complete series of Evil Con Carne was released on iTunes on August 16th, 2018. 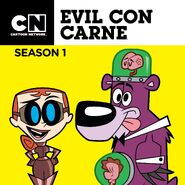 Hector Con Carne as he appears in FusionFall 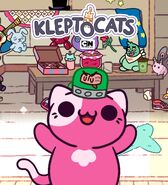