The Cartoon Network Wiki
Register
Don't have an account?
Sign In
Advertisement
in: Shows with wikis, Shows, 1990s shows,
and 32 more
English

This show has a wiki of its own: Ed, Edd n Eddy Wiki.

11 minutes
Status
Concluded
Ed, Edd n Eddy is a Canadian-American animated television series created by Danny Antonucci and produced by a.k.a. Cartoon, for Cartoon Network. The series, which was Cartoon Network's ninth animated series, was first aired on January 4th, 1999. This was also the first Cartoon Cartoon that did not originated from The What a Cartoon Show. Originally, there were only going to be four seasons; however, Cartoon Network ordered two more, giving the series a total of six seasons. It is the longest-running original cartoon on Cartoon Network.

Cartoon Network aired reruns of the series until July 2011, with the last re-run being on July 15th. However, the series briefly returned to the network in October 2012 to celebrate the 20th anniversary of Cartoon Network. Reruns officially stopped airing on the network in 2014. In December 2021, one time return this show, because Christmas specials.

The series revolves around three pre-adolescent boys: Ed, who is slow-witted and often speaks in non sequiturs; Edd, who is usually called "Double D" and is rather intelligent, if high-strung; and Eddy, the avaricious 'leader' of the trio. Collectively known as "the Eds," the three hang around in their suburban neighbourhood of Peach Creek Estates, where "the cul-de-sac" is located. Unofficially led by Eddy, the Eds scheme to make money off their peers to buy jawbreakers, but their plans usually fail, leaving them in various predicaments. The characters rarely leave the neighborhood, and no adults are ever seen.

The show frequently makes meta-references and often breaks the fourth wall. Almost every episode contains references to pop culture, especially movies. All the episode titles, are popular sayings with a word replaced with the name "Ed" (e.g., "Stop, Look, and Ed": Stop, Look, and Listen.) Some are also parodies of movie titles (e.g., "For Your Ed Only" = For Your Eyes Only, "The Day the Ed Stood Still" = The Day the Earth Stood Still, "O-Ed Eleven" = Ocean's Eleven, "Mission Ed-possible = Mission Impossible).

The number of characters in Ed, Edd n Eddy is fixed at 12. (13 if you count Plank) No other characters have appeared besides the main cast and adults are never seen. Danny Antonucci has stated that he wanted the show to appeal to any generation. If a VCR is needed in a plot, it is there. In the first episode, Edd used a computer to give Jonny a lie detector test, powered through a toaster. The kids do not have any current modern day technology stuff such as computers or mobile phones. They do have TVs though, but the kids normally go outside to play for fun. However, in the episode Mission: Ed-possible, Rolf is revealed to be failing Basic Computer Applications, meaning the school has computers.

The first 4 seasons took place during the summer. Season 5 revolved around school and took place in the fall. Season 6 was set in the winter. Most of the episodes begin with something completely unrelated to the storyline of the episode. This is to emphasize the spontaneity of childhood.

Ed, Edd n Eddy used a moderated version of Squigglevision. The crawling lines are not nearly as active as those in Dr. Katz, Professional Therapist, but are still visible. Much of the unfavorable press that Ed, Edd n Eddy received has been because of this animation technique. However, Danny Antonucci calls it a "wobble" effect, and likens it to cartoons of the 1930s where the film tended to be unstable and cause a similar effect.

The use of painted cells lasted up to the end of the fourth season. Though the show was still entirely hand-drawn, all cells are colored digitally, since no animation studios paint cels anymore.

For Ed, Edd n Eddy's Big Picture Show, the show, it was animated in wide-screen format, while the rest of the series is full screen.

According to the interview with Antonucci (a special feature of the Season 1 DVD set), the characters were based on people in his life. Ed, Edd, and Eddy were based on himself and his children, and the cul-de-sac kids were based on people he grew up with. Antonucci also stated that he believed it was important to add Plank to the show; he "thought it would be really cool to do the show with Plank taking on a character of his own" and to cause Jonny to do things he would usually never do. He also stated that Rolf is strongly based on himself and his cousins, since he was part of an immigrant family, and grew up in a first generation foreign household with different customs and ways of life. The kids have multi-colored tongues, because, as Danny Antonucci stated "Kids are almost always eating something that turns their tongues different colors".

Season 4 began on July 5, 2002 with the series' first half-hour special, "If It Smells Like an Ed" and ended on November 5, 2004 with "Take This Ed and Shove It". Season 4 was originally supposed to be the final season til the series was renewed due to popularity.

Season 6 began and ended on June 29, 2008 with "May I Have This Ed?/Look Before You Ed". It was originally supposed to be the usual 13-episode season, but the crew decided to put their focus entirely on the film.

Ed, Edd n Eddy's Big Picture Show aired on November 8, 2009 and was the definite end for the series.

The first 5 seasons and Big Picture Show are available for purchase on ITunes[1], however, Season 6 and the holiday specials are not available.

On Google Play[2] and Amazon[3], the only season currently available for purchase is the third season.

The first 4 seasons were available to watch on Netflix from March 2013 to March 2015.

On April 2nd, 2020, the series was confirmed to be available to stream on HBO Max, however, the series itself was not available when the streaming service launched on May 27th, 2020 and wasn't available on it until January 1st, 2021.

Many video games for the series have been produced, including console, online and mobile games.

Ed, Edd n Eddy: Jawbreakers! was the first console game released for the series. It was released for the Gameboy Advance on March 25, 2003, 4 years after the show premiered. The game mirrors Ed, Edd and Eddy's television quest to make money to buy jawbreakers.

Ed, Edd n Eddy: The MisEdventures was the second console game released for the series. It was released for the PlayStation 2, XBox, Gameboy Advance, GameCube, and PC on October 31, 2005. The game follows the Eds through eight levels, referred to as scams, two of which are unlockable via gameplay and using each Ed's special formations and abilities. In between scams, the Eds are free to roam the Cul-de-sac before heading to the next scam marker. Scams can also be replayed infinitely once they are completed.

Scam of the Century

Ed, Edd n Eddy: Scam of the Century was the third and final console game to be released for the series. It was released for the Nintendo DS on October 23, 2007. The plot revolves around Eddy losing his "Who to Scam and When" book and discovers Kevin has stolen it. It is now up to the Eds to rescue Eddy's book.

There have been other produced works in which the Eds would appear than just their regular series airings. An oft used style by Cartoon Network is an integration with other shows through cultural references, including "Ed, Edd n Eddy."

There have been many specials in which Cartoon Network would run all day marathons for either a promotion or just a special airing for one of their shows. A marathon called Best Day Edder aired on April 21 and April 22, 2007. Every episode was shown in chronological order, ending with the previously unaired last episode of Season 5. Despite Cartoon Network's dramatization of this being the last episode of Ed, Edd, and Eddy, it was mentioned that there will indeed be a shortened, two-episode season six.

Cartoon Network has also produced bumpers, some involving the Eds during commercial breaks. For a short while, Cartoon Network made a series of roughly 2-minute shorts called Ed, Edd, y Eduardo in which Eduardo from Foster's appeared in an Ed, Edd n Eddy episode. These shorts began airing on July 11, 2006 on Cartoon Network.

There was a short music video that was part of Cartoon Network Groovies, which featured popular songs and starred cartoons. The video was of They Might Be Giant's "I'm Not Coming In Anymore" with stylized versions of Ed, Edd, Eddy, and Sarah, entitled "The Incredible Shrinking Day", which aired on Cartoon Network in 2002 and 2003, in which Sarah used a potion to shrink the Eds to a size capable of playing in her dollhouse, with predictable results. Plank starred in a similar video "My Best Friend Plank" which aired in 2002.

In one episode, Ed says his "yeast is rising". This could be interpreted as a puberty comment. 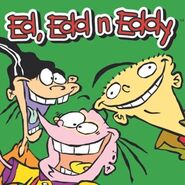 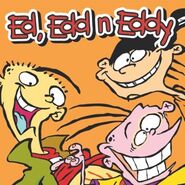 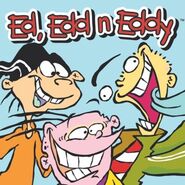 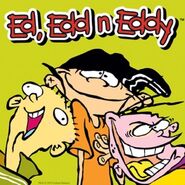 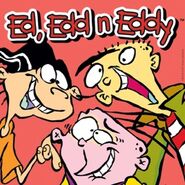 The Eds in the Foster's Home for Imaginary Friends episode, Eddie Monster 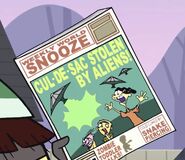 The Eds in a newspaper in the My Gym Partner's a Monkey episode, That Darn Platypus

Eddy's brief cameo in the Codename: Kids Next Door crossover episode, The Grim Adventures of the KND

maquettes of the Eds 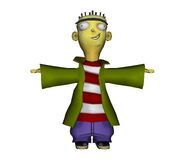 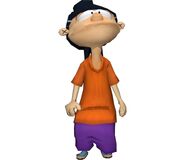 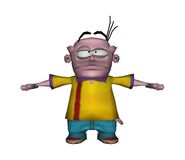 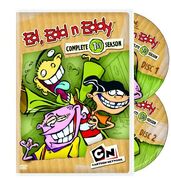 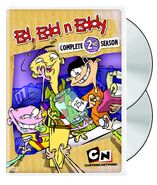 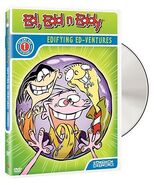 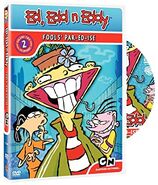