The Cartoon Network Wiki
Register
Don't have an account?
Sign In
Advertisement
in: Hanna-Barbera Series, Shows, 1960s shows,
and 11 more

October 29, 1977
Dynomutt, Dog Wonder is an American animated television series produced for Saturday mornings by Hanna-Barbera Studios. The show centers around a Batman-esque super hero, the Blue Falcon, and his assistant, bumbling yet generally effective robot dog Dynomutt, who can produce a seemingly infinite number of mechanical devices from his body. As with many other animated super-heroes of the era, no origins for the characters are ever provided.

Dynomutt was originally broadcast as a half-hour segment of The Scooby-Doo/Dynomutt Hour (1976-77) and its later expanded forms Scooby's All Star Laff-A-Lympics (1977-78) and Scooby's All-Stars (1978-79); it would later be rerun and syndicated on its own from 1978 on. The cast of The Scooby-Doo Show appeared as a recurring characters on Dynomutt, assisting the Daring Duo in solving their crimes. Originally distributed by Hanna-Barbera's then-parent company Taft Broadcasting, Warner Bros. Television currently holds the television distribution to the series.

In the 1980s, reruns of Dynomutt were on board the "USA Cartoon Express". Reruns were later aired on Cartoon Network from 1992 until 2000 and then on Boomerang starting in 2000. Between January 2 and March 9, 2008, repeats of Dynomutt, Dog Wonder were shown on Cartoon Network's sister channel Boomerang. On June 4, 2009, Dynomutt, Dog Wonder returned to Boomerang and aired Thursdays through Sundays at 10 AM Eastern.

Millionaire socialite art dealer Radley Crown (voiced by Gary Owens) and his mechanical mongrel, Dynomutt (voiced by Frank Welker who got the inspiration for the voice from the Gertrude and Heathcliff characters of Red Skelton), enjoy leisure time in their base of operations Big City, until alerted by the Falcon Flash. They immediately dash for the Falcon's Lair (situated in Crown's penthouse apartment), where they switch to their secret identities, the Blue Falcon and Dynomutt, Dog Wonder, respectively. Blue Falcon and Dynomutt receive the report via TV screen from the secret GHQ of secret agent F.O.C.U.S. One (voiced by Ron Feinberg) and jump into the Falconcar and speed into the fray against assorted evildoers.

In a coup similar to the 1960s Batman TV series, the first 10 minutes of Dynomutt ends with a cliffhanger wherein the Daring Duo, in the clutches of their foes, are subjected to a perilous fate which is resolved immediately after the commercial. Like many animated series created by Hanna-Barbera in the 1970s, the show contains a laugh track created by the studio.

The metallic mutt employs a system of miniaturized transistors which allow him to extend his limbs or neck and use them to perform extraordinary feats; however, none of them ever work properly. B.F. (as Dynomutt lovingly refers to Blue Falcon), is more Dynomutt's victim than his master, forever being hamstrung by the latter's insufferably clumsy mechanized mishaps, which often results in Blue Falcon calling Dynomutt "Dog Blunder". Nevertheless, Dynomutt and the Blue Falcon, who is equipped with his own arsenal of super gadgetry, manage to get the situation well in hand.

Dynomutt, Dog Wonder has the historic significance of casting the first African-American public official in Saturday morning cartoons in the form of Mayor Gaunt (voiced by Larry McCormick).

4. "The Day and Night Crawler"

12. "The Awful Ordeal with the Head of Steel"

14. "The Injustice League of America" 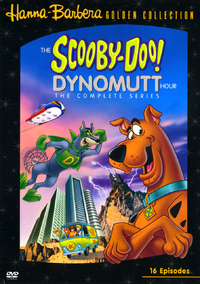 All 16 episodes of the first season were released to DVD in the Scooby-Doo/Dynomutt Hour DVD set from Warner Home Video. The 8 episodes that were broadcast as a part of the Scooby-Doo's All Star Laff-A-Lympics are currently unavailable on DVD.