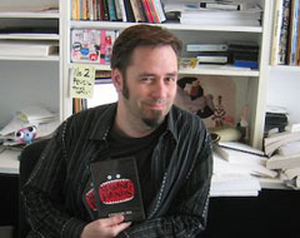 David "Dave" Wasson is an American television producer, director, screenwriter, and art director. He graduated from the California Institute of the Arts with a B.F.A. in 1990. He is best known for creating the Cartoon Network original series Time Squad and directing The Buzz on Maggie and Making Fiends.

After college Wason began working in the animation industry, where he worked odd jobs (animator, designer, storyboard artist) and eventually launched a career as a television commercial director.[1]

While working as a television commercial director he also branched out into a career as a television show creator/director/writer/producer. He was hired as a creator for the Nickelodeon short film program Oh Yeah Cartoons! where he created/directed 11 short films, including "Max and His Special Problem" which one him an Emmy. It was at this time that he also designed some of the characters from the MTV series Clone High.[1]

Wasson then created, co-wrote, and directed the Cartoon Network original series Time Squad, which aired for two seasons from 2001 to 2003 and consisted of 26 episodes.

In 2005, Wasson became director and executive producer of the Disney channel original series The Buzz on Maggie, the networks first Flash based series. Next he returned to Nickelodeon where he designed and directed a pilot el Chupacaba!, and then went on to be supervising producer, director, and art director of the Nickelodeon series Making Fiends.[1]

In 2007, Wasson designed and directed the Powershare commercial "Escape Average," which won the 2007 Annie Award for Best Animated Commercial.[1]

Retrieved from "https://cartoonnetwork.fandom.com/wiki/Dave_Wasson?oldid=54308"
Community content is available under CC-BY-SA unless otherwise noted.