The Cartoon Network Wiki
Register
Don't have an account?
Sign In
Advertisement
in: Hanna-Barbera Series, 1960s shows, Shows,
and 17 more

Dastardly & Muttley in Their Flying Machines

Dastardly & Muttley in Their Flying Machines

22 minutes (approx.)
Status
Ended
Dastardly & Muttley in Their Flying Machines is a cartoon produced by Hanna-Barbera Productions for CBS. Originally the series was broadcast as a Saturday morning cartoon, airing from September 13, 1969 to January 3, 1970. The show focuses on the efforts of Dick Dastardly and his canine sidekick Muttley to catch Yankee Doodle Pigeon, a carrier pigeon who carries secret messages (hence the name of the show’s theme song "Stop the Pigeon"). The cartoon was a combination of Red Baron-era Snoopy, Wacky Races (which featured Dastardly & Muttley in a series of car races), and the film Those Magnificent Men in Their Flying Machines.

The show is widely known as Stop the Pigeon based on the show's original working title and the show's theme song, written by William Hanna and Joseph Barbera (and based on the jazz standard "Tiger Rag") which repeats that phrase so often that it is frequently mistaken as the show's actual title. In the UK, the series remains best known by the shorter name Dastardly & Muttley.

The show had only two voice actors: Paul Winchell as Dick Dastardly and the General, and Don Messick as everybody else. Each 22-minute episode contained: two Dastardly & Muttley stories, one Magnificent Muttley story, and two or three short "Wing Dings" (brief gags to break up the longer stories).

Dick Dastardly and Muttley, the comic villains from Wacky Races, are flying aces and members of the Vulture Squadron, a crew of aviators on a mission to stop a homing pigeon named Yankee Doodle Pigeon from delivering messages to the other side.

Each story features variations on the same plot elements: the Vulture Squadron tries to trap Yankee Doodle Pigeon using one or more planes equipped with Klunk's latest contraption(s), but one or more of the Squadron messes up and the plane(s) either crash, collide or explode (or even all of the above!). While they are falling out of the wreckage, Dick Dastardly calls for help, which Muttley either offers or refuses depending on whether Dastardly agrees to give him a medal. Even when Muttley does agree to fly Dastardly out of trouble, Dastardly seldom has a soft landing. At some point the General calls Dastardly on the phone to demand results. Dastardly assures him that they will soon capture the pigeon, but the General does not believe him and either bellows down the phone or reaches through it and pulls Dastardly's moustache or nose. Klunk then comes up with a new invention and "explains" it in his own unique way. Dastardly says, "What'd he say? What'd he say?" and Zilly interprets, before attempting to run away. Once Muttley has "persuaded" (usually by biting/attacking him) Zilly to return, the Vulture Squadron take off in their new plane(s) to repeat the whole procedure. Eventually, the Squadron is left to lick their wounds as Yankee Doodle Pigeon flies over the horizon, blowing his bugle triumphantly.

Like its predecessor Wacky Races, Dastardly & Muttley in their Flying Machines owes a great deal to the Road Runner cartoons, with Dastardly once again taking the Wile E. Coyote role. Both characters are fanatics, incapable of giving up even in the face of repeated and painful failure. Michael Maltese, who wrote many of the original Road Runner shorts, is also credited as a writer on Wacky Races, The Perils of Penelope Pitstop and Dastardly & Muttley.

Dick Dastardly's appearance in this show was based on the English actor Terry-Thomas, the moustache-twirling villain of Those Magnificent Men in Their Flying Machines, the film which provided the inspiration for Dastardly & Muttley in their Flying Machines.

The setting of the series is never clearly stated, although the type of aircraft suggests the First World War (mostly biplanes, all with fixed undercarriage and some with pusher configuration). The nationality of the Vulture Squadron is also never revealed. If they come from an English-speaking country, it is unclear why they are trying to stop an apparently American pigeon.

There was one Magnificent Muttley segment in each of the 17 episodes. Muttley is the main character, and imagines himself in a lot of situations. Each episode was about 3 minutes in length. These are the characters he pretends to be:

The Magnificent Muttley segments always began with the verse (spoken by Dastardly):

Wake up there, Muttley, you're dreaming again!

You're not Robin Hood and you're not Gunga Din.

You're not a brave knight or a king who's been crowned;

Dick Dastardly (voiced by Paul Winchell) - Dick Dastradly is the leader of the Vulture Squadron, an ex-Wacky Racer turned aviator. He is still the accident-prone villain he had been in the Wacky Races and still owns the Mean Machine. He is referred to as "DD" or "Chief" by Zilly and Klunk, and as "Rick Rasterly" by Muttley (especially when he is muttering). Although he's sometimes mean to Muttley, Zilly and Klunk, he is a nice guy (he says that to himself often, to calm his nerves). When he gets angry, he usually uses his catchphrase "drat, drat and double drat", just before crashing hard into the ground. Although he does not show it very often, Dastardly actually likes Muttley and sometimes treats Muttley with a lot more respect than the rest of the squadron (Zilly and Klunk). His plane is a red biplane with sharped wings and tail.

Muttley (voiced by Don Messick) - Muttley is Dick Dastardly's bungling canine sidekick. He rarely speaks, and when he does it usually takes the form of either (1) just cursing to himself indistinctly, usually following some misfortune that has befallen him, or (2) an excited "yeah-yeah-yeah..." at the offer of something appealing or in response to a command/request from Dastardly. There are times when distinct single words can be discerned amid his mutterings (e.g., "Sassafrassarassa Chicken Zilly"). He does, however, have a distinctive wheezing laugh which he employs whenever something bad happens to Dastardly, or whenever Dastardly is describing his latest "foolproof" plot. Since leaving the Wacky Races, Muttley has learned to fly by spinning his tail like a helicopter rotor. This enables him to save Dastardly from falling (which frequently happens, usually accompanied by a cry from Dastardly of: "MUTTLEY!! DO SOMETHING!!"), although Muttley usually demands a medal for doing so. He also alludes to a medal collection on his shelf. During Wacky Races, Muttley's popularity had grown, so when Dastardly & Muttley began production, he got his own segment (Magnificent Muttley) in which he daydreams that he is a different hero each week, usually with Dastardly as the villain. Each episode ended with Muttley's snickering before or during the ending of the music that led to the conclusion of the episode. His plane is a small purple biplane with the propeller placed behind him.

Zilly (voiced by Don Messick) - Zilly is a pilot in the Vulture squadron. He is a cringing coward, forever running away and having to be fetched by Muttley on Dick Dastardly's order of "Muttley! Fetch!" Each new plan fills him with dread, and he usually utters his catchphrase, "Oh dear! Oh my!", before retracting his head into his coat collar. Dastardly puts up with his cowardice because he is (1) a reasonably competent pilot who is needed to fly planes, and (especially) (2) the only squadron member able to interpret Klunk's gibberish (though on one occasion, he actually repeated Klunk's gibberish when he was asked, "Would you repeat that, Zilly?"). In one episode, he is temporarily turned into a reckless hero via hypnotherapy, but his new heroism turns out to be even more damaging to the squadron than his usual cowardice, leaving no choice to Dick Dastardly but to change him back to normal (causing both Dastardly and Zilly to become a duo of cowards in the process). His plane is a green monoplane with a squared gap tail.

Klunk (voiced by Don Messick) - Zilly is the Vulture Squadron's stout and steady chief designer and pilot. Each episode sees him developing aircraft or weapons (often missiles which home on some bizarre trait, such as a person sneezing) with odd features and attachments designed to catch Yankee Doodle Pigeon. His attempts to explain his inventions are complicated by the fact that he apparently suffers from a speech impediment. His speech is punctuated by howls, clicks, whistles, and growls, accompanied by bizarre facial contortions. Only Zilly can understand him. His eyes are never seen because of his bangs and goggles pulled over them. Klunk often assumes command in Dick Dastardly's absence, e.g. when he went on holiday (only to have his fun ruined by the squadron's further attempts to capture the pigeon), or when he suffered from memory loss. Klunk is probably the most consistent character; he is steadfastly committed, beyond all other aspects of his life, to stopping the pigeon. His plane is a blue biplane and like Muttley, the propeller is built behind him.

The General (voiced by Paul Winchell) - The General is Dick Dastardly's superior, who always speaks (or rather, bellows unintelligibly) to Dastardly on the telephone. He is always able to reach Dastardly by telephone even when Dastardly is flying (or, more often than not, falling) with randomly appearing telephones. The telephones are almost always of the old-fashioned "candlestick" design, and often delivered to Dastardly by paradrop. They also occasionally explode when the General hangs up. The General is an unseen character except for his uniformed arm, which occasionally emerges from the telephone earpiece to grab Dastardly's neck or strike him. In one episode, he pays a personal visit, but only his foot is seen (drop-kicking Dastardly out of the hangar). In one of the Wing Dings short cartoons, we can see a photo of an officer hanging on the wall, which is possibly the General (although this was never confirmed).

Muttley's girlfriend (voiced by Don Messick) - Muttley's girlfriend is only seen in some of the Magnificent Muttley shorts. She is usually the damsel in distress whom Muttley has to rescue from Dastardly's clutches. She looks like a female version of Muttley's breed, but unlike him, she is able to speak distinctly. She may be a figment of his imagination, although in one episode, we see a picture of her on a wall next to Muttley's bed. 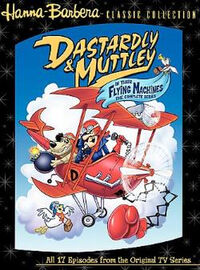 After its original CBS run, Dastardly & Muttley was shown in syndicated reruns on local stations throughout the 1970s and '80s. Some episodes were subsequently distributed on VHS tape by Worldvision Enterprises.

On May 10, 2005 Warner Home Video released the complete series on Region 1 DVD. On July 31, 2006, the series was released on DVD R2 in the United Kingdom but only in HMV stores and its online site as an HMV Exclusive.