This show has a wiki of its own: Courage the Cowardly Dog Wiki.

22 minutes (approx.)
Status
Concluded
Courage the Cowardly Dog is an American animated television series about the adventures of a dog named Courage and his owners Muriel Bagge, a kindly old Scottish woman, and Eustace Bagge, a grumpy old farmer, living together in a farmhouse in the middle of the town of Nowhere, Kansas (often described as The Middle of Nowhere), encountering strange things, which originally ran for four seasons from 1999-2002.

Originally, Courage started out as a Canadian, one-episode cartoon, which was featured in the Cartoon Network special "The Fifty Greatest Cartoons of All Time." In the original cartoon, there was no dialogue, except for a line spoken by Courage (who was voiced by a different, authoritative voice in this short). An alien chicken was the villain in this short, and it would come back for its revenge in the American series. The Chicken From Outer Space was nominated for an Oscar.

Courage the Cowardly Dog was created by John R. Dilworth, who directed each episode, and was produced and aired by Cartoon Network. It premiered alongside Mike, Lu & Og on November 12th 1999, and aired its final episode on November 22nd 2002. The show featured a number of differences from its original pilot, most noticeably featuring voiced dialogue by all characters. As the series continued, the use of stock dialogue recordings grew in use rather than recording new dialogue; this lead to the open disparity of Eustace' original voice actor, Lionel Wilson, still being heard alongside his replacement, Arthur Anderson.

New York-based rock band They Might Be Giants created a tribute song, "Courage the Cowardly Dog", that was animated and aired as a music video on Cartoon Network in 2002. The song also appeared in 2006 on their Podcast 4A.

The series returned to Cartoon Network on Monday, August 31, 2015, airing Monday through Friday from 6-7 am.

In December 2021, one time return this show, because Christmas specials.

Courage the Cowardly Dog revolves around the exploits of Courage, a small pink dog who, despite his name, is afraid of the most mundane things. However, his fear is usually warranted: Eustace, Muriel, and Courage are constantly attacked by or run into various monsters, aliens, curses, natural disasters, and other forms of peril Courage must face.

Every opening of the show documents Courage's past: "Abandoned as a pup, he was found by Muriel, who lives in the middle of Nowhere (Kansas) with her husband Eustace Bagge. But creepy stuff happens in Nowhere, it's up to Courage to save his new home." In one later American episode, more about his past is revealed, that Courage's parents were unwillingly sent to the moon by a psychotic scientist in an experiment to make animals stronger. Courage also seems to have an odd ability to change his shape in a comic style, such as folding himself up to go through the letter slot or imitating a monster in a vain attempt to warn his owners of danger.

Eustace always resented Courage's presence in the home and continually attempts to scare the living daylights out of Courage by whipping out a giant green mask, or fake eyeballs, screaming "Ooga Booga Booga!" Afterwards, Eustace laughs at Courage's expense, until Muriel comically bludgeons Eustace over the head with a rolling pin to which he replies "What did I do?"

In the series, when Courage wants to save his family, he sometimes faces off the villain in a game (instead of typical feats of strength, the methods by which he tries to defeat villains is usually something mundane like dodge-ball or a staring contest, in which Courage always loses), convinces the villain to leave the life of crime, or tricks the villain.

Courage (voiced by Howard Hoffman in the pilot, Marty Grabstein in the series) — A dog, the protagonist of the show. As stated in the opening credits, he was abandoned as a pup and left in an alley, where he was eventually found by Muriel Bagge. Though presented as a "cowardly dog," he acts as the reluctant hero whenever any supernatural forces threaten Muriel and Eustace.

Courage has the quality of never giving up. He has a compassionate side, often showing kindness and friendship to the creatures shunned by the rest of society. Courage speaks in standard English to the viewer, but when he wants to convey a message to the other characters of the series, he usually acts out the message while babbling in high-pitched incoherent gibberish. As the series progressed, instances of Courage speaking English grew less and less frequent.

Courage is recognizable for his scream of terror (often accompanied by exaggerated and grotesque visual images) and his catchphrases, "The things I do for love" and "... or my name's (something rather unusual). And it's not."

Muriel (voiced by Howard Hoffman in the pilot, Thea White in the series) — Courage's owner; a kind, trusting, hospitable grandmotherly figure with a Scottish accent. She loves to cook, clean, sit in her old-fashioned rocking chair, and playing the sitar. She dearly loves her dog, Courage, and looks to him for protection.

In a typical episode, Muriel is captured or threatened in some way, and Courage is usually the one to rescue her. Muriel's cooking, no matter the actual dish, often features vinegar as a special ingredient; this appears as a gag in several episodes of the show.

In her youth, Murial had red hair, which would later turn white in her old age. She is unable to see without her glasses, and frequently assumes she is not in danger when she is without them.

Eustace (voiced by Howard Hoffman in the pilot, Lionel Wilson in the series, later Arthur Anderson in the series, and by Wallace Shawn in "Fog of Courage") — Muriel's husband; a cruel, selfish, greedy, anti-social, bad-tempered farmer. Eustace dislikes Courage (whom he refers to as a "stupid dog") and often pulls cruel jokes on him. A recurring gag in the series involves Eustace putting on a Swahili-like mask and yelling "Ooga Booga Booga!" to frighten Courage. His name may be a play on the phrase "Useless Bag".

Eustace is given a generally negative characterization. He will do just about anything for money — except, it seems, grow anything on his farm. He spends a lot of time sitting in his red recliner watching his dated television and reading his newspaper. He is unwilling to give up the recliner to anyone. His relationship with his elderly mother ("Ma") is strained, though this is largely in part due to his Mother's attitude and negligence on his upbringing. One noticeable exception to foul character is that he is shown to genuinly care for Muriel, though even this can bend to his greed and foul demeanour.

Eustace is bald and wears a maroon hat to hide it. He is very insecure about his baldness and will go to absurd lengths to retreive his hat should it be lost. His greed and need for affluence also knows no limits, leading to such things as selling out his own family for money or subjecting himself to horrific experiments for compensation.

There is an obscure Dilworth animated short, Smart Talk with Raisin - Pulling a Malade out of a Hat, that appeared on MTV's Liquid Television in Season 3, episode 1. It features a proto-Courage character named Hamilton as well as what can be considered a proto-Muriel, the titular Raisin, and a proto-Eustace, named Malcolm (who in this case is Raisin's misanthropic brother).

The premise of the short is that a young girl named Raisin has her own primetime show the format of which is unspecified but the implication is that it is a variety show. In the short, Raisin is encouraging her dog Hamilton to perform a magic trick for the show that involves him pulling a Malade from a hat. It is not explained until the end that the term 'Malade' refers to a teacher from Raisin and Malcolm's school whose surname is Malade.

The majority of the short involves Malcolm verbally abusing Hamilton and Raisin. Several stylistic features are seen in this short that mark it as Dilworth's work, and several characteristics of Courage are seen in Hamilton. For example, Hamilton does not speak, and is timid and non-confrontational in the face of Malcolm's overt hostility. Their appearance is also similar although a key difference is that Hamilton's left eye is drawn elongated in a style similar to some secondary characters in the Courage series. This short does not appear on any official Liquid Television DVD, and is not listed in Dilworth's filmography on IMDB. However, it is currently viewable on Dilworth's Stretch Films site.

On Halloween 2014, an 3D-animated special "Fog of Courage", directed by Dillworth, aired on Cartoon Network Southeast Asia. The special, initially created as a pilot for a potential new series, did not air outside of Asia, but is freely available on Youtube for other territories. Though Gibstein and White returned to voice Courage and Muriel, Wallace Shawn replaced Arthur Anderson as the voice of Eustace in the special, with no recordings of Wilson being used.

On a comment of a Facebook post, John R. Dilworth said that a prequel revival series called Before Courage was planned to be on Boomerang. However, on May 2020, Dilworth was asked about the project on Twitter, he responded with "It somehow transformed into another thing...".

On June 2nd, 2018, there was a another rumor claiming that a rebooted version of Courage the Cowardly Dog is set to premiere in sometime in 2019, but the premiere date that was listed on the teaser image (which also featured a redesign for Courage) was February 30th of that same year. The month of February not being allowed to have a 30th day confirmed that the reboot is indeed false; much like the Ed, Edd n Eddy reboot, the original article of this hoax also came from the exact same FaceBook page not made by Cartoon Network (it is obviously another reason of how this reboot had a confirmation to be fake). The name of the Facebook page who posted these two articles is called The Old Cartoon Network, and it also reminded the viewers to double check the premiere date to see if it is real or not.

Courage appeared in the MAD episode, Once Upon a Toon, as one of the Cartoon Network characters who lost their identy.

Muriel appeared in the Villainous special, The Lost Cases of Elmore.

Courage made a cameo in the OK K.O.! Let's Be Heroes episode, Crossover Nexus. In the episode, he appeared as one of the Cartoon Network heroes that were summoned and defeated by Strike.

Muriel made a background appearance in the Adult Swim proof of concept video, Come and Learn with Pibby!

Courage, Muriel, and Eustace were playable racers in Cartoon Network Racing for Playstation 2 and Nintendo DS.

Courage was an NPC in the MMO online game, Cartoon Network Universe: FusionFall.

Courage appeared as an NPC in the mobile game, Cartoon Network: Match Land. In a later update, he became an official playable character.

The Mask (from the episode of the same name) appeared as wardrobe in the mobile game, Kleptocats: Cartoon Network.

All 4 seasons are available on iTunes.

The series was released on the Boomerang streaming service in 2017.

Courage the Cowardly Dog was added to HBO Max on January 1st, 2021, along with Ed, Edd n Eddy, Codename: Kids Next Door, The Grim Adventures of Billy and Mandy, and Long Live the Royals. 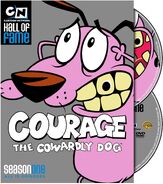 The topic of this page has a wiki of its own: Courage the Cowardly Dog Wiki.