The Cartoon Network Wiki
Register
Don't have an account?
Sign In
Advertisement
in: Animators, Directors, Writers,
and 2 more 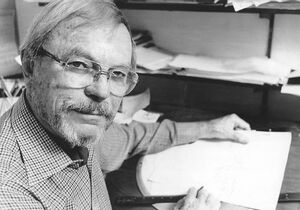 After his career at Warner Bros. ended in 1962, Jones started Sib Tower 12 Productions, and began producing cartoons for Metro-Goldwyn-Mayer, including a new series of Tom and Jerry shorts and the television adaptation of Dr. Seuss' How the Grinch Stole Christmas!. He later started his own studio, Chuck Jones Productions, which created several one-shot specials, and periodically worked on Looney Tunes related works.

Jones was nominated for an Academy Award eight times and won three times, receiving awards for the cartoons "For Scent-imental Reasons", "So Much for So Little", and "The Dot and the Line." He received an Honorary Academy Award in 1996 for his work in the animation industry. In Jerry Beck's The 50 Greatest Cartoons, ten of the entries were directed by Jones, with four out of the five top cartoons being Jones shorts.