The Cartoon Network Wiki
Register
Don't have an account?
Sign In
Advertisement
in: Pages with reference errors, Shows, Chowder,
and 27 more
English

22 minutes (approx.)
Status
Concluded
Chowder is an American animated series which ran from November 2, 2007 to August 7, 2010 on Cartoon Network. The series was created by C. H. Greenblatt a former storyboard artist on SpongeBob SquarePants and The Grim Adventures of Billy & Mandy. The title character is a chubby young 9 year old child named Chowder (often referred to as a cat, bear, rabbit creature[1]), an apprentice to a chef named Mung Daal, who owns a catering company serving the fictional Marzipan City. The show combines traditional animation with stop motion animation and puppetry.[2]

It is the first Cartoon Network original series to be premiered under Stuart Snyder's tenure.

During his time working on Nickelodeon's SpongeBob SquarePants, Greenblatt had been sketching various characters for his own animation series concept.[2] Greenblatt originally based the premise on the idea of the sorcerer's apprentice style of story, such as The Sword in the Stone. The plot devices were modified so that the story revolves around a master chef who teaches his young apprentice how to cook. Chowder himself was developed with no specific species in mind,[1] but rather with the intentions of invoking the image of a child's soft squeeze toy.[3] Some of the inspiration comes from Richard Scarry, with other inspiration from Saturday morning cartoons.[3][4]

Schnitzel was created originally as a personal character design exercise in the late 1990s.

Once Greenblatt pitched the concept to Cartoon Network, and after about two years, the series was approved for production with another year in production before the pilot episode aired. Greenblatt estimates he spent about seven years working on Chowder before the show made it to air, from 2000 to 2007.[2]

Episodes are produced in seasons which consist of 20 half-hour episodes.[5] Each episode is produced with a 30 second puppet sequence that is meant to run over the ending credits. Cartoon Network chooses not to air the puppet credit sequences, but starting on September 3, 2007, episodes have aired the puppet segments.[5] Episodes can be purchased from the iTunes store in the United States which are delivered with the sequences as are episodes which are available on Cartoon Network's VOD website also within the United States.[3][6]

One of the unusual design features of the show is the patterns used on the characters' clothing or skin. The patterns are developed as a full screen image and then sent to the production house where the characters are modified to fill the patterns in over the character clothing.[2][3][7] Using this technique, when a character moves, their patterns do not follow, but display as a "static" background. A similar technique was used in the Monkey Island video game series and Mr. Bean: The Animated Series.[4]

The show is also known for the very wide variety of mediums used in various episodes. These include animation using watercolors and ink & paint in addition to the cartoon's classic pattern style. It also uses stop motion animation with real food, action figures, and clay; live action scenes with the voice actors of the show, and puppets; both marionette and hand controlled. This was also sometimes used in Courage the Cowardly Dog. It boasts one of the most diverse varieties of mediums used in any single series.

Chowder is set in the country of Marzipan. For the architectural style of the city, examples from Monacan and Indian architecture were referenced.[4] The inhabitants of Marzipan City, including the show's primary cast, are composed of various strange non-human creatures, ranging from anthropomorphic animals and humanoids to more abstract and surreal beings including fairies, robots, mammoths, owls, and many more creatures.

The show's humor features puns and meta-references, such as the characters and locations being named after various foods and dishes.[8] Ironically, many food names are altered, like "grubble gum", "thrice cream", "grapples" or "blutter," yet all the characters' names are actual food items and culinary dishes. The show also breaks the fourth wall regularly. An example is found in the episode "Gazpacho Stands Up." Chowder, who is learning to write, scribbles on the television screen. Gazpacho erases this, leaving the Cartoon Network screen bug untouched. When Chowder points this out, Gazpacho comments "Eh, that one doesn't come off. I've tried." Also, the characters are aware that they are fictional characters in a cartoon, often making references to the camera, the animators, and their fanbase. For example, during the episode "Brain Grub" Chowder points out that the foods are fake, and then transports them to another food related Television program. [9] In "The Shopping Spree", the actual, real-life Voice Actors of the series (Nicky Jones, Dwight Schultz, Tara Strong, and John DiMaggio) were "forced" to go out and wash cars to make money after the cartoon characters spent so much money at the mall that they bankrupted the entire show.[10]

For more information about this section, visit: Chowder/Characters

For more information about this section, visit: Chowder/Episodes

A total of 49 episodes were aired in the series. Season One, which consists of 20 episodes, started on November 2, 2007 with "The Froggy Apple Crumple Thumpkin/Chowder's Girlfriend", and ended on July 25, 2008 with the special, The Apprentice Games. Season Two also is 20 episodes long and started on October 3, 2008 with "The Arborians/ The Garage Sale" and ended out with "A Faire to Remember/Tofu-Tofu Showdown" on September 29, 2009 and October 6, 2009. Season Three, which is the final season, consists of only 9 episodes and began on October 16, 2009 with "Hands on a Big Mixer/The Spookiest House" in Marzipan. In 2010, the series had a confusing hiatus and only aired a new episode every month or two. Eventually, the last hiatus ended with the official series finale, "Chowder Grows Up", that saw broadcast on August 27, 2010.

Chowder made a small cameo in The Grim Adventures of Billy & Mandy TV movie spin-off, Underfist: Halloween Bash. He is seen inside of a pumpkin float during a Halloween parade.

Chowder was seen as a non playable boardwalk customer in the 2018 mobile game, Cartoon Network: Match Land. Mung Daal also appeared in the game, but as a in game shop owner.

The first Chowder DVD was released on November 4, 2008. It consisted of the first five episodes.[11] The second DVD containing five more episodes was released on March 3, 2009.[12] A volume three DVD had been confirmed for late 2010, but was cancelled due to the show ending. 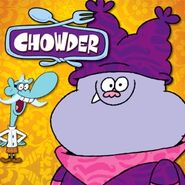 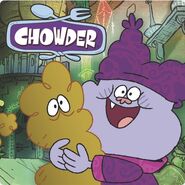 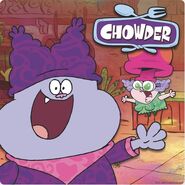