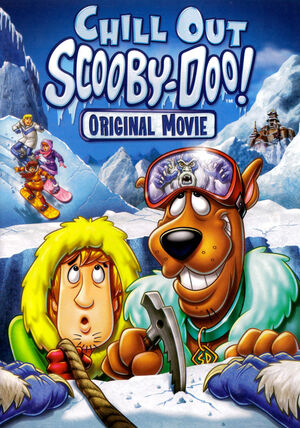 Chill Out Scooby-Doo! is the eleventh Scooby-Doo direct-to-video film series, produced by Warner Bros. Animation (though it used a Hanna-Barbera logo and copyright at the end of the movie). It was dedicated to Iwao Takamoto, who died during the making of the film. It is a semi-remake of the classic Scooby episodes, "That's Snow Ghost!", "The Ghost of Bigfoot", and "There's No Creature Like Snow Creature" as well as "A Scary Night With a Snow Beast Fright", except it takes place in the Himalayas and features the Abominable Snowman.

The film debuted on Cartoon Network on August 31, 2007, with a September 4, 2007, release date for the DVD. It was the final direct-to-video Scooby-Doo movie that Joseph Barbera was involved with (but was not dedicated to him; instead, Tom and Jerry: A Nutcracker Tale carried a dedication to him).

On a climbing expedition in the Himalayas, Professor Jeffries is led by his Sherpa, Pemba to a high point on a mountain with an ancient tablet with writing on it. Jeffries is out looking for the Abominable Snowman who lives in a cave in one of the mountains. He is convinced that the Snowman lives close by, but Pemba tells him he will not lead Jeffries anymore, as it would be intruding on the territory of the snowman. Jeffries, who seems to care about the snowman over the safety of Pemba, decides to cut the rope and continue. As soon as Jeffries fades from view, Pemba sees the out line of a large creature in front of him.

Meanwhile, Fred, Velma, and Daphne are on vacation in Paris. However, Scooby-Doo and Shaggy have not arrived yet, and the gang wonders where they are. Shaggy and Scooby are in a small plane that they think is going to Paris, but is really going to the Himalayas to drop off Alphonse LaFleur, a world famous French hunter and trapper. LaFleur wants to find and kill the snowman, and is taking Shaggy and Scooby along as bait. The pilot questions whether the monster is real, but Lafleur tells him it is. LaFleur then locks Shaggy and Scooby up with his equipment, and throws them off the plane. Shaggy, realizing they are not going to Paris, manages to get a quick phone call through to Fred before the phone goes dead. Fred uses the GPS on his phone to track them, and then he, Velma, and Daphne head to the Himalayas to find them. Velma wonders if it has anything to do with the legend of the creature in the Himalayas.

Meanwhile, Shaggy and Scooby manage to land near a small village on the mountain. In the village are Jeffries and Pemba. Jeffries tells Pemba he never should have left him, and that he almost died on the mountain. Many of the other villagers are leaving, fearing the creature and its wrath. Shaggy and Scooby go to the High Lama to ask for a phone to call their friends. The High Lama, a strange person, tells them there is only a phone on the weather station nearby. Scooby finds a room where the villagers worship the Snowman. The High Lama is uneasy about letting them go in, but lets them. In it is a statue of the Snowman holding a very large crystal, and Jeffries asks if he could see it, but the High Lama says no and closes the door. They then meet Pemba's sister Minga, who has decided to stay in the village. Minga is constantly listening to the radio, and has a crush on the DJ of the station she is listening to. Pemba tells her to leave the village, and he, Shaggy, Scooby, and Jeffries (who says that everyone should stick together), decide to go to the weather station. LaFleur arrives, and decides to accompany them.

As they travel, Minga runs up to them and says that she heard on the radio that a big storm is approaching. Shaggy wonders how there could be any reception so high up, and Pemba tells him there isn't, its just the weather station man pretending to be a DJ. Pemba is annoyed that Minga did not leave the village, and thinks she just wants to see the weather station man, but she tells him there really is a storm. Everyone looks up and sees a dark cloud, and they decide to set up camp to wait out the storm. During the night, Jeffries gets out of his tent and leaves with his sled, which is filled with TNT and other explosives. Some time later, the Snowman attacks Shaggy and Scooby, who were standing watch. LaFleur tries to capture the Snowman, but all his traps backfire and work on him. Scooby and Shaggy manage to lose the Snowman but get lost themselves. However, they are relieved to see a snowplow approach them. In it is Scooby-Doo! and the Loch Ness Monster|Del Chillman, whom the gang had meet before. From Scooby-Doo! and the Loch Ness Monster Del takes them to the weather station, where he works. Chillman tells them he decided to take the job so he could find out if the legend of the creature is true. He also reveals that he is the DJ. He had the radio just to do weather reports, but plays songs to pass the time.

Meanwhile, Fred, Velma, and Daphne get to the village and see it is deserted. They follow Shaggy’s tracks and see where the party camped the night before, and also the foot prints of the Snowman. Velma notes that they are not very deep in the snow. They find Pemba, who was caught by one of LaFleur's traps. Minga is nowhere to be found and Jeffries is still gone, so the gang decides to split up and search for everyone else. At the weather station, Chillman goes out to look for the others. Once he leaves the Snowman appears and attacks Shaggy and Scooby. As they run away, LaFleur shows up and tries to capture the creature, but falls of a cliff, apparently to his death. Scooby and Shaggy manage to escape and find their way to the lost kingdom of Shangri-La, and meet the High Lama but are pursued by the Snowman.

Del catches up to the rest of the gang, but finds the weather station destroyed and some helium cases missing. As Scooby and Shaggy walk around the city, the Snowman appears and gives chase. Daphne and Pemba find a large cave and go inside, and conclude that is where the monster lives. They also find an empty helium case. Shaggy and Scooby lose the monster again, and everyone meets up in an old mine, each coming from a different direction. There they see Jeffries mining for lots of crystals like the one on the yeti statue. They conclude he is the snowman and capture him, although he says he is not. Then the snowman appears and chases everyone, while Jeffries gets free and follows them. The monster chases Shaggy, Scooby, and Jeffries down the mountain. Jeffries is trying to get the crystals that are in the mine cart that Scooby and Shaggy are riding in. The rest of the gang prepares a trap for the Snowman, but Shaggy, Scooby, and Jeffries get caught in it. The High Lama comes out to see what happened. Then an avalanche starts, and almost crushes Velma and Del, but the Snowman saves them at the last moment. The creature is unmasked to be Minga, who has been behind the mystery from the very beginning. She used the helium to fly, which caused the footprints to not be as deep. She did it so the weather station man would not stop broadcasting his radio show. Del is touched by Minga's actions. Jeffries is taken to jail because he was taking the crystals for his own gain. The gang wonders if there really is a Snowman, but then LaFleur appears and tells them that something saved him from his fall and brought him to the village.

The gang, along with Del and Minga, return to Paris for their vacation. Unfortunately, Fred gets on the wrong plane and ends up in the Amazon as the others head there.

Warner Home Video released Chill Out Scooby-Doo! on DVD in Region 1 on September 4, 2007.

Retrieved from "https://cartoonnetwork.fandom.com/wiki/Chill_Out_Scooby-Doo!?oldid=51519"
Community content is available under CC-BY-SA unless otherwise noted.