Casper and the Angels

Casper and the Angels

May 3, 1980
Casper and the Angels is a 30-minute Saturday morning animated series produced by Hanna-Barbera Productions that aired for one season (1979–80) on NBC. Casper the Friendly Ghost was a guardian angel for two female motorcycle space cops named Minnie (who was rather ditzy and had a Southern accent) and Maxie (who was a much more intelligent African-American woman) in the year 2179. They were joined by a rambunctious ghost named Hairy Scary, who would scare villains and troublemakers, but unlike most other ghosts, was accepting of the fact that Casper was a gentle ghost who did not like to scare people. The show was apparently Hanna-Barbera's second attempt to cash in on the popularity of Charlie's Angels, the first being Captain Caveman and the Teen Angels (Laurel Page also provided a voice for that show).

Twenty-six 15-minute segments shown as thirteen 30-minute episodes were produced, as well as two 1979 television specials: Casper's Halloween Special and Casper's First Christmas. The series also aired in reruns on USA Network during the 1980s and early 1990s, Cartoon Network from 1992-2005 and Boomerang from 2000-2004.

The series is set in 2179 where Casper helps out policewomen Mini & Maxi on baffling cases (2 segments per episode). Hairy Scary was there to convince Casper to scare people! Casper & Hairy Scary had two NBC specials as well. A Halloween special where Hairy Scary & his friends ruin Halloween for Casper & his new orphan friends. And a Christmas special that featured Yogi & the gang taking shelter @ their haunted house.

5. "Something Fishy / The Smiling Lisa"

8. "Gone to the Dogs / Private Eyeball to Eyeball"

11. "A Shoplifting Experience / The Impossible Scream"

12. "Prehistoric Hi-Jinx / The Commander Is Missing" 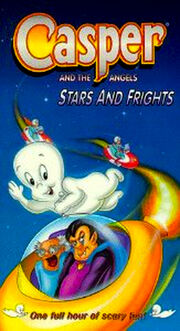 On September 5, 1996, Turner Home Entertainment released "Casper: Stars & Frights" on VHS. This release contains 5 episodes from the series. It has been discontinued and is now out of print.