Cartoon Orbit was an online gaming network created by Turner Online to promote its shows and partners. Created as an addition to the Cartoon Network website, Cartoon Orbit opened to the public in October 2000. Its main attraction was a system of virtual trading cards called "cToons", which generally featured animation cells from programs broadcast on the network, though advertisement-based cToons were also common. A head-to-head strategy game titled gToons was added to Cartoon Orbit in October 2002.

The site began to suffer from lack of maintenance in 2005 and on October 16, 2006, Cartoon Network shut down Cartoon Orbit, leaving users with a "Thank You" certificate as a token of their appreciation.

The brainchild of Sam Register, Cartoon Orbit was first built using parts of Communities.com's "Passport" software (not to be confused with the current Communities.com, which is unrelated). This software was a 2D, avatar-based chat server, where members could decorate their own spaces, and it was used extensively in Orbit for displaying and editing cZones. Most of the chat functionality, however, did not become part of the finished product. To comply with the Children's Online Privacy Protection Act, Cartoon Orbit instead had a list of pre-written words and phrases that players could send in a chat box.[1]

Cartoon Orbit was officially launched in October 2000 as an online community with required registration.[2] Its membership grew 150,000 members strong by mid-December, and that figure increased to over 300,000 by February 2001.[3] Members exceeded 850,000 by October 2001.[1] Shortly after its release, Register expressed a desire to convert Orbit's point-based currency to a cash-based setup, but this never came to fruition.[4] As part of a larger campaign with Cartoon Network, a promotion for the fund-raising program Trick-or-Treat for UNICEF, which entailed exclusive Halloween-themed cToons, was held from October 1 to November 5, 2002.[5]

For the first few years of its existence, the site was updated weekly. However, beginning in mid-2005, it became apparent that Turner Online had stopped maintaining the site. Updates were ceased completely in February 2006, and on August 17, 2006, Cartoon Network removed the navigation for Cartoon Orbit from its main header. The link could only be found on the bottom of the home page.

Starting September 29, 2006, users were no longer able to sign up for and create new Cartoon Orbit accounts. When clicking the "Join Now" button, the user was presented with a "Registration is Closed" page. On October 2, 2006 a notice that Cartoon Orbit would close was posted on the front page. 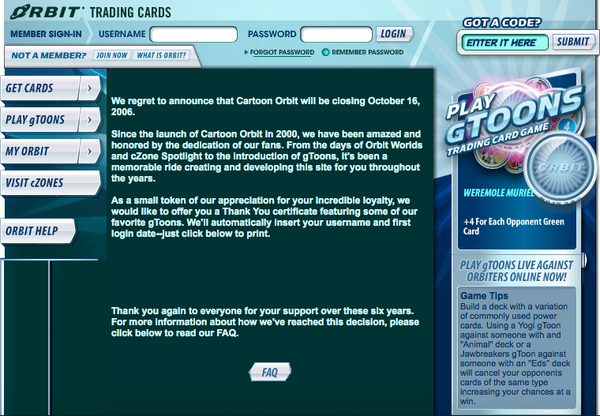 Cartoon Orbit officially closed in the early morning of October 16, 2006.

Players were given points to purchase cToons, from the in-game store, called the "cMart." Players could also receive cToons, gToons, and cRings by entering special redemption codes, trading with other players, or through auctions.

cToons came with a wide range of functionalities. Most were static, but some were animated and/or had sound. Other cToons, when clicked, played mini-games or had special functionality (such as a Dexter's Laboratory-themed cToon that automatically counted down to Albert Einstein's birthday).

Players were given their own gallery spaces, called cZones, to decorate with cToons, cRings, and gToons of their choice. One could further customize their cZone by changing their cZone's background.

cToons ranged from very simple to animated and/or sound capable. Some cToons were part of special sets, and developed their own names. These included: 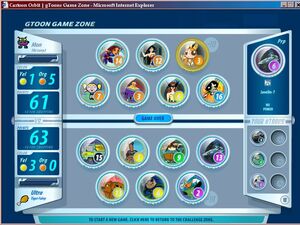 In this game, 2 players assembled decks composed of 12 gToons each. Cards represented characters, places, and props from shows broadcast on Cartoon Network, and each card had a color, value, and occasionally a special effect that could modify the value(s) of other card(s). A game of gToons, which typically lasted about three minutes, involved two players strategically using seven gToons at a time to gain the most points by the game's end. Two colors (determined by the "bottom" card of each player's deck) were goal colors: if the two colors were both "neutral" colors (black or silver), the higher total point value won. If there was exactly one non-neutral color (blue, red, yellow, green, purple, etc.) between the goal colors, a player with more cards of the non-neutral color would receive a 15 point bonus to their total before determining victory. If neither color were neutral, a player could win by having more of each color in play than the opponent; otherwise, the higher total value won. Five separate expansion packs containing different goons were released between 2003 and 2006. 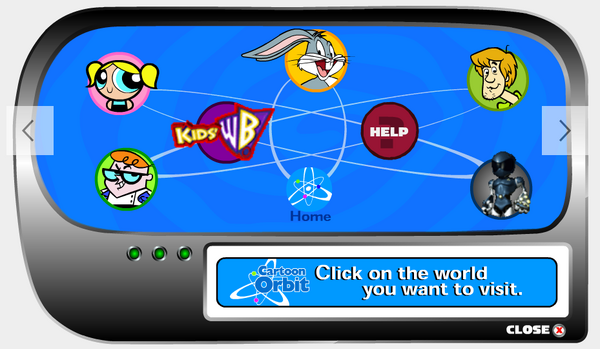 Before 2002, there was an interactive area titled "Worlds" on Cartoon Orbit. These "worlds" were based on several fictional locations from the Network's cartoons. They were removed before the transition to Flash in 2002. The "world" pages came complete with a quote or quip from that world's characters, a poll, and links to "Spotlight" cZones.