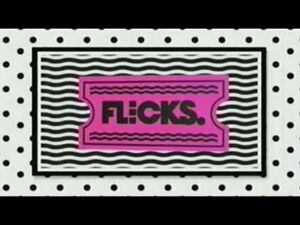 Cartoon Network Flicks, or simply Flicks, was a former weekend programming block launched in the Summer of 2008 that aired movies, and that replaced Movie Madness.

Before programming and the end of the promos, the quote "Catch a flick, with the Flicks" would be stated, and then the programming would soon air.

The name of the block was changed on Christmas to "Flicksmas". On July 3, 2010, "Flicks" were rebranded with a live-action human family, no longer containing the Noods. It was later hosted by internet personality KevJumbua (Kevin Wu), and finally, the sentient C and N letters from the current network logo along with a dog named "Flicksy" began hosting.

The block was discontinued at the end of February 28, 2015. Movies are still shown on the network but without the Flicks branding.

Retrieved from "https://cartoonnetwork.fandom.com/wiki/Cartoon_Network_Flicks?oldid=119288"
Community content is available under CC-BY-SA unless otherwise noted.