The Cartoon Network Wiki
Register
Don't have an account?
Sign In
Advertisement
in: Shows, 1970s shows, 1980s shows,
and 14 more

Captain Caveman and the Teen Angels

Captain Caveman and the Teen Angels

11 minutes
Status
Ended
Captain Caveman and the Teen Angels is an American animated series produced by Hanna-Barbera Productions from September 10, 1977 to June 21, 1980 on ABC. The first and second seasons were originally broadcast as segments of the Scooby's All-Star Laff-A-Lympics block from 1977 to 1979 and the third season featured Captain Caveman and the Teen Angels in their own half-hour timeslot in 1980. This program aired in reruns on USA Network (via USA Cartoon Express) in the 1980s, on Cartoon Network from 1992 until 2000, and on Boomerang beginning in 2000.

Captain Caveman and the Teen Angels centers on the mystery-solving adventures of the Teen Angels—Brenda, Dee Dee, and Taffy—and their friend Captain Caveman (or Cavey for short), a prehistoric caveman whom the girls discovered and thawed from a block of ice. The concept and general plot for the show was seen as a parody of Charlie's Angels (which also aired on ABC). It also borrowed heavily from other Hanna-Barbera shows such as Scooby-Doo, Where Are You! and Josie and the Pussycats, among others. Captain Caveman was also on the "Scooby Doobies" team on Laff-A-Lympics.

Captain Caveman's powers include super-strength, a variety of useful objects hidden inside his fur, and a club that allows him to fly and from which pops out different tools he uses to fight crime. His trademark is his battle cry of "Captain CAAAAAVEMAAAAAAANNNN!" Captain Caveman's voice was provided by Mel Blanc.

Like many animated series created by Hanna-Barbera in the 1970s, the show contained a laugh track created by the studio, one of their last productions to do so.

Captain Caveman (voiced by Mel Blanc) is the main character of the show. He is a caveman who is thousands of years old (his exact age is never disclosed). He can pull various objects from the long body hair that covers his entire body. He can also fly, but his flying power always seems to fail him at the worst possible moment. Sometimes he would attribute this mishap to an energy shortage ("Uh oh! Bad time for energy crisis." CRASH!), which was a pun on the gasoline rationing shortages of the late 1970s. He speaks in stereotypical "caveman-talk", replacing subject pronouns with their object equivalents and dropping articles such as "the" (for example, "Me know where bad guys are hiding."), and often mumbles the nonsense phrase "unga bunga". He also has a bad habit of occasionally eating large non-food objects in one gulp (i.e. bicycles, TV sets, safes, table lamps), and the Teen Angels occasionally have to stop him from eating potential clues that will help them to solve the mystery.

Captain Caveman's family was introduced during his later stints as part of the Flinstones comedy show. These episodes however, have either not been shown or heavily edited when aired on the Boomerang Network due to incidents of domestic violence in scenes where Captain Caveman clubs his wife on the head.

Dee Dee Skyes (voiced by Vernee Watson) is the brains of the Teen Angels, is the group's sole African-American, and acts as their unofficial leader. Dee Dee and the rest of the Teen Angels found the frozen Captain Caveman and defrosted him. She wears her hair in an afro and usually wears a red turtleneck sweater with a blue skirt and red knee high boots. Both her dress style and her knack for solving mysteries make her similar to Velma Dinkley of Scooby Doo fame, while she also bears a resemblance to Valerie from Josie and the Pussycats.

Brenda Chance (voiced by Marilyn Schreffler) is a cowardly brunette who is always scared of the demons, monsters and phantoms that she encounters. She usually wears a pale pink top and a pair of hot pink flared trousers with a white belt.

Taffy Dare (voiced by Laurel Page) is the blonde member of the group, renowned for her cry of "Zowie!" whenever she comes up with a plan (or "Another Daffy Taffy Plan" as Brenda and Cavey would call it) to catch the culprits. In spite of her usually zany plans, Taffy is actually very capable and clever. She has the ability to sweet-talk Caveman into acting as bait for her plans to capture the culprit. She usually wears a green dress with matching shoes.

1. The Kooky Case of the Cryptic Keys

2. The Mixed-Up Mystery of Deadman's Reef

3. What a Flight for a Fight

4. The Creepy Case of the Creaky Charter Boat

5. Big Scare in the Big Top

7. The Crazy Case of the Tell-Tale Tape

9. Cavey and the Kabuta Clue

10. Cavey and the Weirdo Wolfman

14. The Strange Case of the Creature from Space

3. Cavey and the Volcanic Villain

5. Cavey and the Baffling Buffalo Man

7. Cavey and the Murky Mississippi Mystery

12. The Haunting of Hog's Hollow

14. The Mystery of the Meandering Mummy

15. The Old Caveman and the Sea 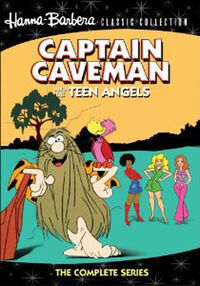 On July 23, 2013, Warner Archive released Captain Caveman and the Teen Angels: The Complete Series on DVD in region 1 as part of their Hanna–Barbera Classics Collection. This is a manufacture-on-demand (MOD) release, available exclusively through Warner's online store and Amazon.com.