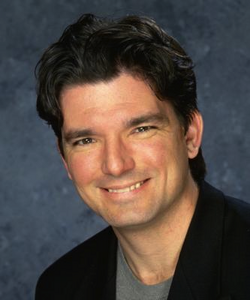 Hartman was born in Highland Park, Michigan to Elmer Earl Hartman III and Carol Davis. He received the nickname "Butch" as a youth and continues to use the name professionally as an adult. Hartman spent his childhood in Roseville, Michigan and his teen years in New Baltimore, Michigan. He graduated from Anchor Bay High School in New Baltimore in 1983. He subsequently attended the California Institute of the Arts in Valencia, California.

While still attending the California Institute of the Arts, Hartman received the chance to intern as an in-between animator on the Don Bluth film, An American Tail. Shortly after graduating for the California Institute of the Arts Hartman was hired as a character designer for the animated series My Little Pony. Instead, they had him working on storyboards (which he had not done before) and as quickly as he was hired, he was fired. Soon after Hartman found work with Ruby-Spears, where he worked on It's Punky Brewster and Dink, the Little Dinosaur. He was also a part of the video reference crew for the Disney movie, Pocahontas.

In the mid-1990s he was hired at Hanna-Barbera Studios and created the shorts Pfish and Chip and Gramps for the What a Cartoon! Show. Eventually he became a writer, director and storyboard artist for several of the "What a Cartoon!" shorts that got turned into series, including Dexter's Laboratory, Johnny Bravo, Cow and Chicken, I Am Weasel and The Powerpuff Girls. After his contract with Hanna-Barbera finished up he went to work with former co-worker Fred Seibert on the Oh Yeah! Cartoons show.

His biggest success came in 1997, when he created The Fairly OddParents. (The idea came to him during the drive from Hanna-Barbara to Nickelodeon to pitch an idea to Fred Seibert.) It was originally a series of made for TV shorts on the anthology show, Oh Yeah! Cartoons. In 2001, Nickelodeon picked it up as a full series. The Fairly OddParents became a huge hit, second only in the ratings to SpongeBob SquarePants. Due to the success of "OddParents", Hartman was asked to create another cartoon for Nickelodeon, (Hartman says the President of Nickelodeon asked him if he had an idea, and before he could say the title he was given a contract) which would later become Danny Phantom. To produce that show, in 2004, Hartman created Billionfold Studios. Billionfold also produced another Hartman cartoon for Nickelodeon, T.U.F.F. Puppy, which premiered on October 2, 2010, alongside the Jimmy Neutron spin-off Planet Sheen. The series received mixed reviews and ran for 3 seasons before being cancelled.

His fourth series, Bunsen Is a Beast, premiered on Nickelodeon January 16, 2017.

On February 8, 2018, Hartman announced in a YouTube video that he had left Nickelodeon on February 2 after having worked at the studio since December 1997. He confirmed in the video that this resulted in the end of production on Bunsen Is a Beast after just one season.

Retrieved from "https://cartoonnetwork.fandom.com/wiki/Butch_Hartman?oldid=82285"
Community content is available under CC-BY-SA unless otherwise noted.