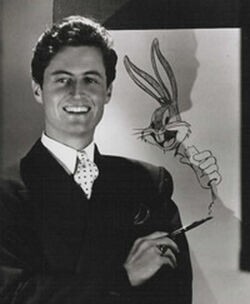 Robert Emerson "Bob" Clampett (May 8, 1913 – May 2, 1984) was an American animator, producer, director, and puppeteer best known for his work on the Looney Tunes animated series from Warner Bros., and the television shows Time for Beany and Beany and Cecil. Clampett was born and raised not far from Hollywood, and early on expressed an interest in animation and puppetry. After leaving high school a few months shy of graduating in 1931, Clampett joined the team at Harman-Ising Productions and began working on the studio's newest short subjects, titled Looney Tunes and Merrie Melodies.

Clampett was promoted to a directorial position in 1937 and during his fifteen years at the studio, directed 84 cartoons later deemed classic and also designed some of the studio's most famous characters, including Porky Pig and Tweety Bird. Among Clampett's most acclaimed films are Porky in Wackyland (1938), Coal Black and de Sebben Dwarfs (1943) and The Great Piggy Bank Robbery (1946). Clampett left Warner Bros. Cartoons in 1946 and turned his attention to television, creating the famous puppet show Time for Beany in 1949. A later animated version of the series, titled Beany and Cecil, ran on ABC for five years beginning in 1962 and ending in 1967.

In his later years, Clampett toured college campuses and animation festivals as a lecturer on the history of animation. Clampett died of a heart attack in Detroit, Michigan on May 2, 1984. After his death, he was criticized by many of his peers at Warner Bros. with accusations of egotism and plagiarism, with many notable figures, including Chuck Jones and Mel Blanc, expressing a general dislike for Clampett. Despite this, his Warner cartoons have seen renewed praise in the decades since for their surrealistic qualities, energetic and outrageous animation, and irreverent humor.

Retrieved from "https://cartoonnetwork.fandom.com/wiki/Bob_Clampett?oldid=86297"
Community content is available under CC-BY-SA unless otherwise noted.