The Cartoon Network Wiki
Register
Don't have an account?
Sign In
Advertisement
in: Shows, 1960s shows, Shows older than the network,
and 16 more

Birdman and the Galaxy Trio

Birdman and the Galaxy Trio

January 20, 1968
Birdman and the Galaxy Trio is an animated science fiction television series created by Alex Toth and produced by Hanna-Barbera Productions. It debuted on NBC on September 9, 1967, and ran on Saturday mornings until January 20, 1968. The program consists of two segments: Birdman, depicting the adventures of a winged superhero powered by the sun, and Galaxy Trio, centering around the exploits of three extraterrestrial superheroes. NBC ran two new segments of Birdman each Saturday, separated by a new segment of Galaxy Trio.

The character of Birdman was revived three decades later in the Cartoon Network/Adult Swim TV series Harvey Birdman, Attorney at Law, and several characters from Birdman and the Galaxy Trio appeared in the revival.

Birdman is really Ray Randall who, through unknown means, was given powers derived from the sun. As Birdman, he posses super strength, the power to fly via giant bird wings on his back, solar energy blasts, enhanced hearing, and the ability to create a shield out of solar energy. The only catch is that his powers dwindle when he is out of the sun for too long. Using his powers, Birdman and his purple eagle Avenger, along with later addition Birdboy, battle the forces of evil, including the criminal syndicate FEAR, led by the mysterious Number One.

The Galaxy Trio is a group of interplanetary law enforcers who battles criminals throughout the cosmos. The group consists of Vapor Man, who can change into any type of vapor; Gravity Girl, who can control gravitational forces; and Meteor Man, who can increase all or part of his body to impossible heights, gaining super strength in the process.

Birdman (voiced by Keith Andes) is an ordinary human endowed by the sun god Ra (although this origin is only vaguely and briefly hinted at during the series; his real name is never mentioned) with the ability to shoot solar rays from his fists and project "solar shields" to defend himself against attacks. He was recruited by a top-secret government agency, Inter-Nation Security, and now works full-time fighting crime, assisted by his eagle sidekick Avenger. In addition to the abilities he received from Ra, Birdman also possesses the power of flight, thanks to the giant wings which sprout from his back. His sole weakness is that he must periodically recharge his super powers through exposure to the sun’s rays. His trademark is his battle cry of "Biiiiirdman!!" when he goes into battle.

Falcon 7 (voiced by Don Messick) is Birdman's eye patch-wearing contact with Inter-Nation Security, and the person from whom Birdman typically receives his missions.

Birdboy (voiced by Dick Beals) is birdman's sidekick. The two first met when Birdman happened upon a shipwreck, of which Birdboy was the only apparent survivor. Since the boy was near death from exposure, Birdman transferred some of his own super energy to him, reviving him and giving powers similar to Birdman's, and he went on to aid him in several episodes. Birdboy lacks the natural feathered wings sported by Birdman, however, and is only able to fly with the assistance of the mechanical wings strapped to his back. He spends much of his time searching for his father, who was lost in the wreck, but this was never resolved. In Harvey Birdman, Attorney at Law, Birdboy reappeared as Peanut, Birdman's erratic, scheming legal clerk.

General Stone appears several times in Birdman with other military leaders, and tends to find himself on the receiving end of the villains' schemes.

Number One (voiced by Vic Perrin) is the leader of the sinister organization F.E.A.R. and Birdman's "number one" enemy. F.E.A.R. is behind many plots over the course of the series, frequently employing supervillains to perform nefarious tasks. The organization was seemingly defeated for good and its leader arrested in "The Wings of FEAR", but it occasionally resurfaced without any explanation.

The Galaxy Trio is a group of three extraterrestrial superheroes, Vapor Man, Meteor Man, and Gravity Girl, who patrol space in their cruiser Condor One maintaining order and fighting evildoers in the name of the Galactic Patrol law enforcement agency. The ship was equipped with a "displacer" very similar to the transporter device on Star Trek, which was a contemporary show.

Vapor Man (voiced by Don Messick) has the ability to transform part or all of his body into gaseous form (a power shared by at least some residents of his home planet of Vaporus), enabling him to fly, escape from physical bonds, and squeeze through very small spaces, as well as producing various forms of "vapor" (such as "freeze vapor") from his hands.

Meteor Man (voiced by Ted Cassidy) is a native of the planet Meteorus. Meteor Man is distinguished by his ability to increase or decrease the size of any part of his body. He gains superhuman strength in any limb that he chooses to enlarge.

Gravity Girl (voiced by Virginia Eiler) has the ability to bend the laws of gravity to her will, allowing her to fly and lift very heavy objects with her mind. The daughter of the king of the planet Gravitas, she left her luxurious home and life of privilege at an early age to fight crime with the Galactic Patrol and was subsequently assigned to the Galaxy Trio team, with whom she has served ever since.

Chief is a man referred to only as "Chief", he is a recurring character in Galaxy Trio. He fulfills a similar role to that of Falcon 7 in Birdman. 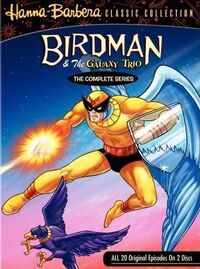